I am heartbroken. This has never happened to me so far in my life and that’s a pretty long time considering that I am two years shy of sixty. For the first time in my life a dog actually said, though not in so many words, that it disliked me. Can you believe that? If Luci hears of this I know SHE will have LOTS to say.

I have been a friend to dogs (and cats) all my life. They know I am putty in their paws. Bellies get rubbed, that space behind ears get scratched. Once in a blue moon one might have misunderstood me, and here I am remembering dear darling Simi, but NONE have ever hated the sight of me. But then, you live and learn, eh?

In the days of yore, when kings ruled, I hear they had a dedicated room in the palace for the queen to express sorrow, hurt, what have you. So there she would retire, the heartbroken queen, to drive home the point to the king just how disappointed she was in whatever he had done. The story that comes to mind in this regard is that of Queen Kaikeyi.

Queen Kaikeyi did not like the fact that her husband King Dasarath had chosen Rama, his son by Queen Kausalya, the eldest wife, as the crown prince instead of her own son, Bharat. So what did Queen Kaikeyi do to express her disappointment in what the king had done? She removed all her finery, wore rough-spun cloth, left her hair open and threw herself on the floor of the room for mourning.  Of course, I saw none of this with mine own eyes. All this is purely hearsay.  But umm… it ought to be true because *everyone* says so, right?

So where were we before I went wandering off to talk about kings and mourning rooms? Ahh, this that a dog had expressed his dislike for me though none had ever done so up till now.  Such a traumatic experience was this rejection from a member of the canine kingdom that I sorely felt the need of a mourning room. I don’t have finery and jewels to discard, nor have hair enough to open and leave loose, but you know what I mean. I could sit there in isolation and do a thorough soul-searching, the woman hated by a dog for no reason.

Yup. There was no reason. Did you think I pulled its tail or poked it in the ribs? Did I steal its toy or its crunchy bone? No Siree, no. And yet, the wee little dog took an instant dislike to me. He stared at me while I sat with the others, and barked and showed me his pretty teeth. He then came after me while I was walking away while I thought to myself, ‘Shail, this is that part of your life where you lose a tiny piece of your fleshy spot! Brace yourself woman!‘ But he only got my dress, and that too lightly, and then went back and plonked down at his spot.

But you know, what? I don’t blame the little guy. Humans, curse them, have been mean to him and I probably reminded him of one of his abusers. The little fellow is a rescue dog. He was just skin and bones while he first joined the family (friends of my sis and brother in law) who now take care of him. He is very shy and scared of strangers and doesn’t realize I only have love in my heart. Yes, the same heart that’s now broken because he rejected it. So, while I sweep up the broken pieces of my heart, take a look at the picture of the heart-breaker below: 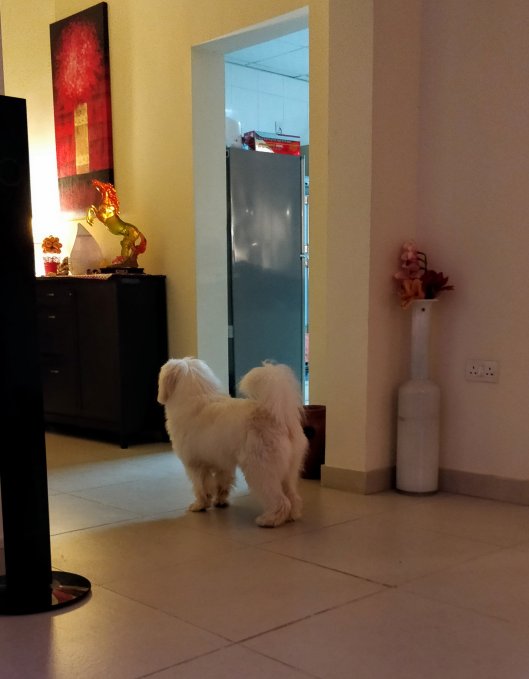