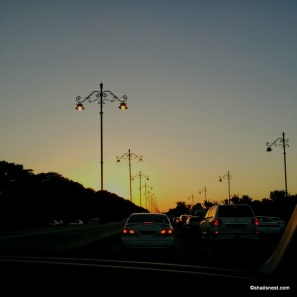 A beautiful sunset and a traffic jam

The day before started quite early for me, somewhere around half past three in the morning when Luci decided that licking Mommeee on the nose was a good idea to wake her up an hour earlier than she needed to, and ended almost at midnight when I finally flopped on the bed and fell fast asleep within seconds of my head touching the pillow. In between came a lot of other things like saying goodbye to Luci (*sniff*), being driven to the airport by the L&M, going through immigration, boarding a flight, trying to read and falling asleep every ten minutes en route, alighting at my destination, going through the formalities and then walking out to be welcomed by the waiting sis and brother-in-law, being driven to their home to a sumptuous homemade lunch, falling asleeep, waking up, going to the festival at Al Naseem Park and having a good time. 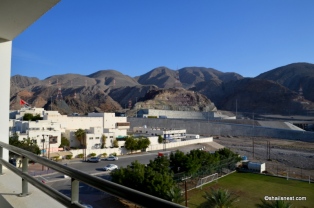 Suffice to say it had been a loooooong day. And there was absolutely no need to wake up early the next morning. But as happens mostly in such cases, I woke up precisely at the same time as I usually do back home. I stared at the scene outside the window with my nose pressed to the glass window (which was pretty cold, btw, not the nose, the glass I mean). The brooding mountains did look like giant dinosaurs sleeping (which had been how sis had described them to us) or biding their time to pounce on us unsuspecting humans. Soon after, the brother-in-law left for office and the health-conscious sis said, ‘Let’s go to the terrace and walk.’ I hadn’t had my morning elixir. The morning cannot start without tea. While the sister got ready I quickly made tea and with my cuppa and the camera, went up with her to the seventh floor and the terrace. Perfect.

The sun was already up and above the mountains. There were some doves flying around. The sis pulled up a plastic chair from near the swimming pool, for me to sit before she started on her walk.  I put my camera bag down and took my first sip of the elixir and almost spit it out.

Ayyeeee! I exclaimed. Sis turned around, eyebrows raised. This tea is salty!  I wailed in despair. And I had made it myself too. Sheesh, what a start to the day. But the salty start to the day was soon transformed to sweetness. For just then someone chirped incessantly to get my attention. I looked up to find Mr. Sparrow. Ahhhh a bird! The winglings never fail to cheer.

You are not from hereabouts, eh Lady? he asked. And so it began. We struck up conversation and soon he brought his girl over as well to be introduced. She was a bit shy, though. The doves were cautious and kept their distance. But they will come around eventually, I am confident. Meanwhile, the sis finished her walk and began her hula hoop performance. Pulling up a chair, I sat down to watch. The tea had to wait.