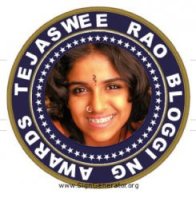 Today I chanced upon a lengthy discussion among some people on the much whipped topic, clothes or rather the lack of it on the person of the younger lot. Let me rephrase part of it, clothes or lack of it on the female of the younger lot. Parents were being cautioned to exercise more strictness on their offspring (read female). There were some expressions of helplessness from a few of the participants (what can parents do?? *Sob sob*) on the difficulty in making the rebellious (female) youngsters toe the line. But, what took the cake for me was the general agreement on one thing: it is the skimpy dresses the girls wear that is the reason for the misadventures they face in society.

This is actually nothing new to me. I have been hearing such baseless nonsense from the time I have been two and a half feet high or perhaps even as long as I can remember. Now I have not only grown to a respectable five feet, but also have covered five decades of my life. And believe it or not, NOTHING seems to have really changed. They still repeat the same old baloney these days too. ‘Cover up girls or else….!’ it goes, like a broken record. The onus it seems is still on the woman.

Now that does surprise me a little bit. Normally we learn with time. Not so it seems with dumb society. One would think a conclusion such as this which has over time been disproved again and again would have woken the dumb Society up big time, enough to go looking for other more real reasons for this continued state of affairs. But no, with characteristic stubbornness, Society and its Main Components of Morons still hold steadfastly to the moronic “wisdom” that atrocities on women are dependent on what they wear.

I suppose pretending to be blind and deaf, while doling out cures for what plagues it, is the Society’s prerogative. Or else it might have to answer the cries of the violated babies and toddlers, the sobs of the grandmothers, the anguished tears of the very ordinary folk in their ‘respectable’ attire (dictated as safe by that very society) who form the majority that is preyed upon. But in trying to hypnotize ALL into believing such absolute baloney about skimpy clothes being THE reason, dumb Society is questioning the intelligence of those of us with functioning brains.

The majority may be in that induced state of zombie-hood where they wrongly believe in such drilled drivel. Or else how the hell can anyone say sanctimoniously, “Even some four–year olds wear skimpy clothes”. I swear to you, I am not joking. Do you grasp what that sentence implies?? Do you realize how far this ‘skimpy clothes is the reason’ has taken us?? Now we are saying that a kid of four (or her parents by default), attracts molestation by her ‘skimpy’ dress.  For God’s sake! So what do we do?? Cover up our kids with sack and tie the loose ends so nothing would show to tempt the prowling dogs?? Give me a break. How about training those dogs not to pounce? Is that too much to ask??

Aren’t we a WONDERFUL society?? We train the canine canines we own, but we don’t train the human canines that live among us to behave themselves. Instead we let them loose on the society and ask everyone else including the four year olds to take protective measures. Nobody is against protective measures, as monsters can exist anywhere and care has to be taken. But how can society degrade to such a level that people refer to what even children wear as skimpy?? Too skimpy for what?? Would that really be a cute baby frock they are talking about?? What would be the level of brainwashing for someone to say that, do you think?? The next thing you know, someone would say your baby in her rompers in the crib is also skimpily dressed and might be a source of temptation, so bundle her up.

Among the many comments that made up the discussion, there was only one, just one solitary comment that did not agree with the general trend and said,

“I personally don’t agree with the statement that women tend to be the target of eve teasers/rapists because of clothes they wear! It’s all due to the mentality of the guys in question! A guy with a sick mind would target a woman even if she is wearing a salwar suit or sari! Women’s clothing can be provocative sometimes I agree, but citing that as the reason for women getting into trouble is just a lame excuse for blaming the women victims instead of the criminals! Sadly this is aided by our society itself!”

Ohh well. Thank God for small mercies. Someone at least thinks those other than the skimpily dressed could be at fault! Did you notice the word he (yes, this comment is by a man) used to describe the excuse society and the majority of its unthinking components use?? LAME. He hits the nail on the head with the word. The excuse is nothing but lame, without basis, used to cover up a lot of other failings that have to be addressed and are not, an excuse without backing of facts used to justify the errant ways because solving it would mean moving away from the present comfort zone of the society. Religion, culture, tradition will all be dragged in, apart from the glory of womanhood, honor (which it seems is something so special that ONLY us useless women can uphold it) and what not, to justify retaining status quo, to continue blaming the woman and her clothes or lack of it for the actions of certain men.

By this logic, civilizations of the past should not have survived. They wore rather even skimpier clothing. And I know for a fact that their collapse was not due to men jumping on those skimpily clad women of the times. In fact there was a time in India when both men and women wore the same attire and went topless. Were men of the past of better caliber than the present day ones?? We know what the guilty men do in the present times. Like spoilt brats, they point to the victim and say petulantly, “She made me do it!” and the society at large like an over indulgent and useless mother comforts, “There, there my dear child! Is she the one?? We’ll make sure neither she nor any of her ilk will do any such thing again, okay?? Aww… mere acha bacha, mat ro!”

If only the society turned its ire on the supposedly acha bacha and like a true mother, gave him one solid whack on his fleshy bottom and asked him to behave himself, how different things would have been. She will wear what she likes, understood?? Keeping control over yourself is your damn business. Get it?? Which society has the guts to tell their wild sons that?? Obviously not the Indian society, not yet anyway.

Yet, the same society expects a hungry homeless child to control its basic human feeling of hunger and won’t condone if he runs away with the food on their table just because it was in front of the child’s eyes tempting him. Even a small hungry child from the poorer section of society knows he cannot snatch the ice-cream that is displayed so tantalisngly. Why?? How does he know that?? How come grown men do not know the difference?? If at all the child transgressed and stole the ice cream, will any one blame the ice-cream for looking oh-so-tempting or ask the ice-cream seller not to display it any more?? Then, why does society indulge the LAME excuses of no good monsters for their transgressions??

When wild animals, attracted by human scent enter populated areas, maul and kill humans, none (not even Maneka Gandhi) will champion their cause to roam the streets free and attack humans as they wish. None shall request you wear armor always and forever. Instead the appropriate authorities step in and the wild animals are mercilessly shot, if not captured and caged or even released in the jungles where they rightly belong. But….

When women are attacked in a civilized society by the wild among them, the onus is conveniently shifted to the victim; they are asked to cover themselves up so the ‘wild’ can roam free without being “tempted”. Society SHAMELESSLY absolves itself of the duty to ‘tame’ these ‘wild’ among us or even cage/ shoot them if need be. Instead it even more shamelessly preoccupies itself with its one and ONLY favorite pastime: CLOTHING THE WOMEN.

Shame on you Society!

Slut Walk: Instead of focusing on the issues the media focuses on how women must protest (IHM)

92 thoughts on “Clothing the women”