I have the dubious distinction of being related to someone who is a fake news creator/generator. No kidding. There I was one day reading an article listing the fake news generating sites and people, when I saw a familiar name staring right back at me.  Whoa! If I knew how to, I would have whistled just then.  I was already aware of the person’s political leanings and also their penchant for extreme views, but that they would actually go to the extent of spreading lies, willfully and blatantly at that, was news to me.

What happened was this. Two years or so back, fireworks stored at a temple had accidentally caught fire. Many lives were lost, many more were injured. There was an investigation and foul play was ruled out by authorities. It was an unfortunate accident caused by negligence. The fact is accidents caused by fireworks is nothing new to Kerala, the reason being people’s lackadaisical approach to the rules of safety set in place by authorities. And yet here was someone who was using the opportunity to point fingers at a particular community as perpetrators of the crime with no basis whatsoever, and thus trying to fan the flames of hatred against them.

It made me think, I tell you, of the stuff people around you are made of. Do we really know them, those we call our family? (And here by family I mean those outside the nuclear family unit).

Ever since the change in the political scene in recent times, I have been witness to family members privately making hate-speeches (Yeah, I have quite a few of them who think their religion is the best and others are all out to get them!). Who’d have thunk they held such dark thoughts and feelings inside for those belonging to a different religion while pretending to be epitomes of tolerance? Not me. I tried talking to one or two of them, but to no avail.  Personally, I’d rather see humans as just that, HUMANS, not slot them into categories of race, religion or any such man-made divisions. But the lesson I have come away with from my interactions is that you cannot talk hatred out of prejudiced hearts. What I do instead these days is to keep my distance from bigots and their bigotry.

All this has given rise to some other thoughts. What if (Yup, my favorite pastime: What if!) things become worse and we come to a stage when lines need to be drawn? Who will be on your side of it and who on the other? There’s one more scenario that plays itself in my mind. What if I am attacked for the views I hold, or the stand I take? People are being attacked and arrested for all sorts of things these days, for innocuous Facebook posts even. Will the people who I call family, albeit extended, come to my aid if I am in danger or simply say, ‘She brought it upon herself!’ and wash their hands of me? Or worse still, will they join the attackers, pick up a sword themselves, yell, “Off with her head!” and send it rolling? Frankly, I don’t have any answers. 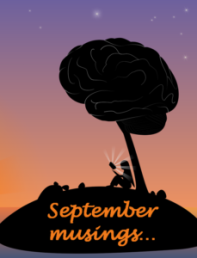 9 thoughts on “No answers”