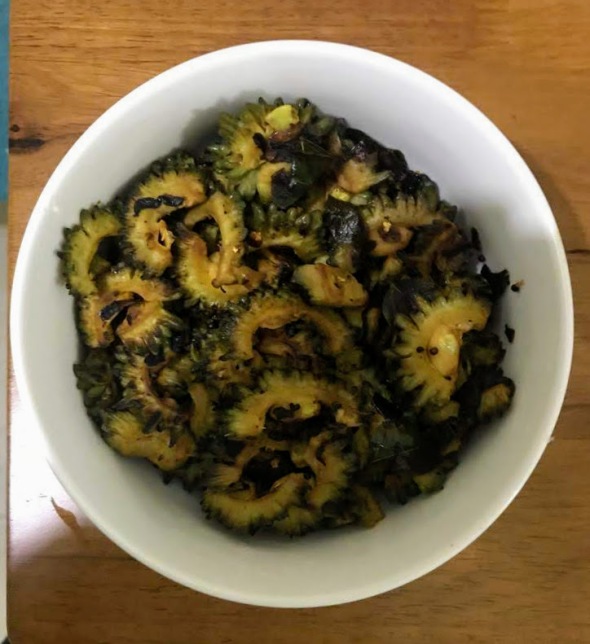 Today the First Born called me to ask how to make bitter-gourd mezhikkupuratti . That’s bitter-gourd sautéd in oil with onions and basic spices like turmeric and red chili powder. After ringing off and making the dish, he even sent me a picture of what he had cooked. It looked just perfect, exactly like his mother makes. Hehe..

Whether made into mezhukkuperatti, or thoran (made with grated coconut), or pachadi (where you deep fry bitter-gourd slices and throw it into a gravy of coconut, curd and some spices), or sambar (with lentils and spices), bitter-gourd is an awesome vegetable. It amuses me to think the First Born didn’t like its bitter taste as a kid. He would have only the deep fried version, like his dad and brother, where the bitterness of the vegetable was successfully disguised, enough to make it palatable to them.  Years later, here he was cooking the dish in its more bitter form and relishing it.  How times change.

Had I hated bitter-gourd too as a kid and developed a liking for it in later years or always liked it? I don’t know. What I do know is that I love bitter-gourd in any form. I remember eating the mezhukupuratti spread on top of crackers as a snack during tea-time. That’s how much I like bitter-gourd.

Why do some of us love its bitter taste and others go ‘yuck!‘ at its mere mention? I recently heard that the answer to it is all down to genes or DNA or something. No kidding! Some of us are predisposed to tolerate the bitter taste and others aren’t. Now I get it, why the L&M recoils in horror, well almost, at the sight of bitter-gourd. Not only that, he also detects the slightest bitterness in any dish, which people like me miss by a mile. Look at what happened the other day.

The house-help brought some flowers and said they can be made into thoran. I had never cooked or even eaten it, before. What’s more, I had not even heard of the damn thing until then. Agastya poo (Agastya flower), she called it. She had seen it in the market and got it especially for me, she said. Looking at her happy face, I didn’t have the heart to say ‘no’. I mean what if it was dangerous, like the wrong kind of mushrooms or something? But I nodded to her, and exited the kitchen with my tea and immediately started googling for ‘agastya poo‘ on my phone. Google spat out the results in seconds, showing me huge flowers, the edible kind, it reminded me, and which came in four colors. South Indians and also east Asians use it as food, I read. So far, so good.

A little later, the help came to me with a spoonful of the agastya poo thoran she had made. It tastes yum, almost like cabbage, I told her tasting it. But imagine my surprise when at lunch time the L&M tastes it and says, ‘It’s bitter!’ What? It hadn’t been when I tasted it in the morning! ‘Well, the aftertaste is bitter!’ he insisted. Hmm… I tried a spoonful and… yes, he was right about that, but it was so MILD an aftertaste that it had not even registered.

So there you have it, some are more tolerant to bitterness of higher concentration while others are sensitive to even the slightest suggestion. The gene, DNA or whatever at play. Hmm… This has made me think, you know. I wonder, does it mean that those with the predisposition to like bitter things are also good at swallowing bitter pills in life with more equanimity? And no, I don’t just mean those prescribed by the doctors. 😉

6 thoughts on “A bitter-gourd tale”