Today was my lucky day.  I saw a White-cheeked Barbet after a long time. And also some of the regulars.

I was putting the clothes out to dry on the line when I thought I saw a movement in the mango tree in my neighbor’s yard.  Poor eyesight or not, I can always tell when there’s a bird in the foliage better than those with perfect vision. Immediately I paused to see which of my winged friends it could be. Soon, a piece of green, like a leaf almost, detached itself from the mango tree and latched on to the coconut tree trunk. It was a green and pretty White-cheeked Barbet.

That decided it. I left the clothes in the bucket and went in to get my camera. Clothes could wait, barbets would not. Of course, there was no guarantee that the barbet would still be perching on the coconut tree when I returned, but one had to take one’s chances. The bird was still there when I returned, but as if sensing my presence even at that distance, it dived back into the mango tree as soon as I raised the camera to my eye. Bummer! I decided to wait for the barbet to reappear rather than go back to putting clothes on the line.

I waited and waited, but the barbet did not show itself.  Meanwhile, I rued the lost opportunity. White-cheeked Barbets look so much like leaves that it’s difficult to spot them on trees. And here one had shown itself on the bare trunk of a coconut tree and I had lost. Just then I saw a flash of blue, yes blue, not green. Apparently there was someone new on the scene. A White-throated Kingfisher.

Unlike the barbet, kingfishers are much more accommodating.  Apart from the fact that their bright blue color makes them easier to spot, they also sit still on branches and cables for you to click them to your heart’s content.  Today the kingfisher was being coy as well, perching where my eyes (or lens) couldn’t reach it, hidden by the huge banana leaves. Then, a sudden gust of wind moved the leaf giving me a window of opportunity which I did not waste. 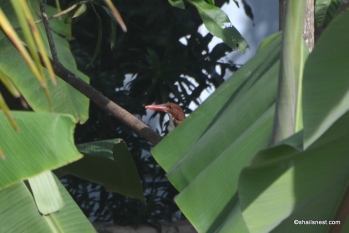 Next, along came a baby Tailorbird hopping from one branch of the hibiscus to the other and from there on to the jatropha. It came back with something in its mouth, to balance on the ixora plant. The Purple-rumped Sunbirds soon descended on the scene, flying from the moringa tree, a favorite of theirs, to the pink hibiscus, chattering and swinging at the ends of branches. What a delight! In the distant cable sat a Little Flowerpecker, too far for me to take a decent snap. The crows and mynas also had come and gone. The Rufous Treepie chick was done with its bath.

Standing there in the sun, waiting for the barbet to show up, my thoughts went to a recent book I had read by one of my favorite authors, Ruskin Bond:. My Favourite Nature Stories. In one of the stories in the book, he talks about barbets.

Summer visitors to Shimla, Mussoorie and other north-Indian hill resorts will be familiar with its monotonous, far-reaching call: ‘pee-ho, pee-ho’

Up here in the Garhwal Himalayas, there is a legend that the bird is the reincarnation of a moneylender who died of grief at the unjust termination of a law-suit. Eternally his plaintive cries rise to the heaven: ‘unn-ee-ow, unn-ee-ow’ which means ‘injustice, injustice!’

And then he adds

To me it always sounds like: ‘pakaro, pakaro!’ or ‘catch him, catch him!’

I tend to go with the last one. The barbet’s cry definitely has the ‘r’ in it or so I feel. The White-cheeked Barbet is called ‘Chinna Kutturuvan‘ in my mother tongue. I have always felt that the barbet goes ‘kutturooo kutturoooo‘. It’s cry brings to mind my ancestral home, and the jackfruit, mango and other trees behind the house. I didn’t know what the bird was called back then, but the kutturooos still ring in my ears.

As if on cue, right then the dear Chinna Kutturuvan aka White-cheeked Barbet started going kutturooo-kutturoooo. I looked up. There was the bird, now sitting on the branch of the teak tree. Too far, but what the heck, something was better than nothing! 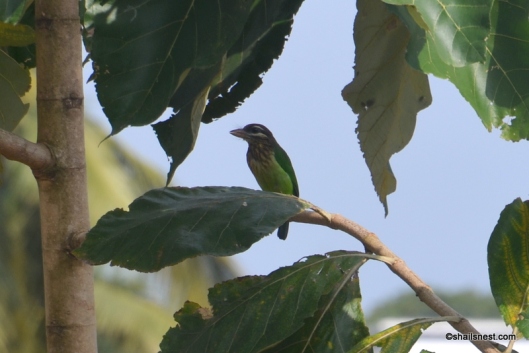