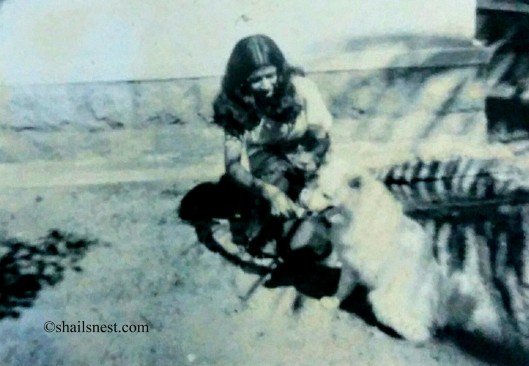 Have you wondered why we count up to ten before telling the dog it can start eating? I mean, why not eight or nine or eleven? Eleven is a nice number, come to think of it. Ten plus one. But no, we always opt for the staid, old, boring ten.  Why?

It wasn’t easy teaching our dog Chinchu to count to ten or rather, to sit still while WE counted up to ten. He came to us as a full grown two year old totally lacking in disicpline. He was a Spitz or probably a Pomeranian or maybe a cross between the two. We really didn’t know. All we knew was seeing his grinning face in the glare of the headlights of father’s car. Our parents had taken us along on a visit to friends. Just as we reached the gate of the house, the headlights picked up this white hairy dog with bright shiny, NAUGHTY eyes standing by the roadside.

Being extremely fond of dogs we (my siblings and I) ooh-ed and aah-ed and called out to the cute dog. Apparently his cup of human love was nowhere near the decently acceptable limit. To rectify matters he came running to us pronto putting us in a quandary. Here was a dog who refused to go away but wanted to follow us into the house of our guests. As soon as we were seated, there he was inside the drawing room and horror of horrors, on the sofa. We, the children, were thrilled and also aghast. Omg. Had we encouraged him to follow us? What were we going to DO?

Much to our relief, we found it to be not the case. That was HIS home. He had broken free from where he was tied behind the house and run out to roam the streets. But on finding some very ‘nice’ children who loved dogs were visiting, he had come to play the perfect host. Jumping on the sofa, drooling buckets all over us and generally making a ‘nuisance’ of himself much to our delight. Well, maybe not the drool or his smell, but his enthusiasm was infectious enough to delight us.

The lady of the house, his mistress, hated dogs. So Chinchu was always tied up in an open enclosure behind the house. ALWAYS. Till the man of the house came home from office to take him around a bit. Then it was back in chains for him. Chinchu I mean, not the man. That day, the man of the house looked thoughtfully at the three children laughing and giggling at the antics of his dog and he made a snap decision. Take him, he’s yours, he said, the picture of magnanimity.

It is true that we had been demanding a dog of our parents. But, but…. this dog was all grown up. And dirty. And unruly to boot. We wanted a cute pup to bring up as our own, to discipline, not this grinning, smelly maniac who didn’t take orders, demanded attention and salivated all over you. So we politely declined.

I bet they had a conversation, the couple, after we left. I can almost hear the ultimatum from the wife and the husband thinking those ‘nice’ children were a better bet than abandoning the dog on the street. So the next day found him on our doorstep with dog, dog chain and dog bowl. He’s yours, he told us. You wanted him, no? He had conveniently forgotten that we declined. We were too polite to remind him that.

That’s how Chinchu (we didn’t change his name) became ours. We did succeed in cleaning him up and turning him into a soft, white bundle of joy. We also showered love on him, probably more than he had bargained for. He basked in its glow. Or was smothered, it is all a matter of perspective. His favorite was my mother and pushed himself between any person who sat close to her. He bit me once because I tried taking away the shuttlecock which he had run away with while we were having a game.

I don’t really remember if we succeeded in teaching him to stay put while we counted up to ten, though it was easy as pie with the dogs that came after him. In fact with Luci I can go on repeating one up to nine many times over, never getting to ten at all, and though puzzled and impatient, she waits for ten to be said before she picks up her treat.

What we couldn’t do for sure with Chinchu was tame his wild and free heart. He continued running away if the gate was left open inadvertently, his only aim to roam the streets for a while, after which he returned of his own accord, with a sheepish grin on his face. He knew all would be forgiven, the rascal.

At the end of it all the question remains. Why do we count up to ten? 😉

2 thoughts on “Counting to ten”