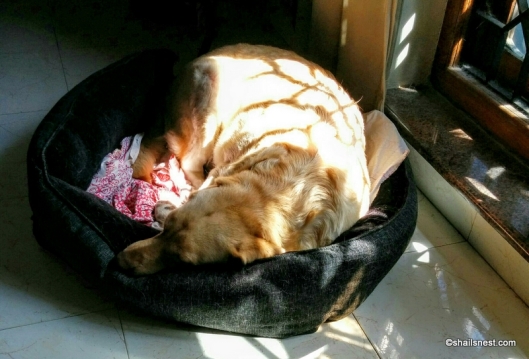 It is difficult functioning without proper sleep. It has been a time of too little sleep for me due to a late night flight and an early morning landing. Once home, I slept a little in the morning, a little before lunch and a lot more after, but still am left feeling groggy.

There was a time when sleep was hard to come by. My family blamed the hours spent with my laptop for it though I tried to convince them otherwise. Later it turned out that my malfunctioning thyroid was at the bottom of things. I restrained myself with great difficulty from sticking my tongue out at them and saying, “There! What did I tell you?!” I feel such opportunities to prove them wrong present themselves so sparingly that one must grab them with both hands. But sadly I let it go to waste and let the men be. Sheesh. Lost opportunity.

All my life, I have been the ‘early to bed and early to rise’ (well, not as early as my parents would have liked it to be) sort of person. I could barely keep my eyes open till as time as the warden left after her rounds while in the hostel. She expected us girls, to study at least till 10 o’clock. When my own children were growing up, I was always emphasizing the importance of sleep to them, unlike other parents who wanted their children to sit up late, study and study some more. Sleep on time, I used to urge them, and the rest of the things will fall into place. Not that they listened to me once they hit teens.

With television and cable channel on the scene, even the L &M started keeping later hours (errr… I mean as late as 11 o’clock, hehe..) leaving me wringing my hands in frustration. No, I am kidding. Who had time to wring hands? Not me. While he and the kids watched a movie I promptly fell asleep sitting on the sofa and when the movie got over, woke up, smiled brightly at them, said, ‘Eh? Eh? What? Is it over?’. Then, I walked to the bedroom and fell asleep again.

Such blissful days are all in the past. I have changed affiliation and joined the night owls. I am referring to the children, for the L&M has defected to the ‘other’ side which once had been mine, the roosters, the early risers. Though I sleep late now I do wake up reasonably early. Add to that a small nap in the noon and it rounds up my sleeping hours perfectly, keeping me , sane and not sticking straws in my hair. But the last twenty-four hours saw me get very little sleep and that too broken up into bits throughout the night and the following day that I am at present a zombie who cares two hoots if there are straws sticking out of her hair. Hence this post on sleep, the thing foremost on my mind right now.

So, good night. See you all tomorrow, fresh as a daisy, and also, with a new post I have thought up to bore you all. 😉 But, but….. what if this happens to me tonight?! The mind boggles.  😮