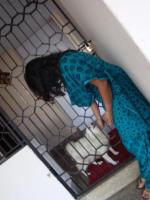 Hmmm… I wonder if I should consider confining the green salwar-kameez to the unused section of my wardrobe. Of course I have not outgrown it though at the rate at which I am growing I might do just that in the days to come. Well might you ask what then I have against this particular dress?! Is it the color?? No siree, it’s not. I don’t have anything against green (in fact I love the green in nature) or any color for that matter. I love them all equally. In fact, I have never understood the passionate preference or the extreme hatred for this or that color exhibited by quite a majority of the populace. As far as I am concerned colors are colors and they are ALL pretty as can be. When I go shopping, I go with mind wiped clean of prejudices against any color and buy whatever catches my fancy right then and any trends be damned. Trends (especially in colors) are for the fickle-minded who don’t know what they want and have no option but be led by the choices of others.

Come to think of it, there was a time when I was all for a particular color for what was to be worn for a special event in my life. I had decided quite early on (too early in fact) that I was going to wear a wedding sari of an off-white color with gold or silver work on it. In the deep recesses of the wooden box with brass corners, I had seen mother’s wedding sari in the same shade and had fallen in love with it. So that was the color I was going to have too, I was determined. I know, for a girl who was not yet at a marriageable age, had no idea whatsoever of what sort of a man she wanted to marry, strangely and certainly enough, I had definitive ideas on what I was going to wear for my wedding.

Many of you might be horrified at this pushing aside of all colors bright for an event of the magnitude of a wedding. But Mallus till recently have been married in their good old set mundu which comes only in one shade, which the Mallu calls kodi color and which to the rest of the non-Mallus is off-white/cream/whatever. The new colors that had by then invaded tiny Keralam from other states made not an impression on me.

Rudely intruding upon this day dream of mine one fine day…. errr, make that night, came another dream (not a day dream this time but the sub-conscious variety) and  in that dream, I saw myself getting married, to this tall guy, in a green sari. I had no thoughts about the tall guy, never wondered about him, but the green sari in my dream ruffled my feathers. Green?? No way at all, I thought to myself on waking up, not realizing that the sub conscious was trying to tell me something. I was only eighteen and a wedding was something still far off in the distant future.

When finally the event materialized after some breaking of ice, I found myself in Nagercoil, the hot-spot for wedding saris during the early 80s for those staying in Trivandrum . My Aunt who accompanied us on the mission was the first to throw the spanner into my (day dream-) works. You are not going thinking of wearing white for your wedding, she said in disbelief. White that beautiful color of purity is associated with widowhood in India hence the horrified looks when one wants anything close to white in your trousseau. Excuse me dear Aunt, you are talking through your bally hat, I wanted to tell her, like a true Wodehouse fan, though she had never in her life worn a hat, least of all knew how to talk through one, off-white is not white and hence is called off-white.

Have you seen bulldozers?? If you have you’d get an idea why I didn’t get a chance to voice my opinion. She was a human bull-dozer in appearance and use of words. I looked at mother for support, who looked everywhere else but at me. What nonsense, said my Aunt and put forward the irrefutable logic that everyone in India understands and on hearing which they quietly lay themselves on the ground with all fours in the air in abject surrender, namely, what will people think?? She then proceeded to clinch it with, what will the groom’s family think/say??

Well, the fight was lost even before it had begun. The groom’s family must be appeased at all costs. It is the golden rule by which more than ninety percent of the population in India lived(s). And unfortunately, I was still the lamb, not yet the tigress that could look Aunts and other such in the eye and make them wilt with ‘Oh yeah?? Says who??’ which now is sort of second nature.

I had no option but to fall back on some other color. I was damned if I was going to go in for red or magenta that every Rani, Rita and Rajini seemed to be draping themselves with for their wedding. So for whatever it was worth, I put my foot down in a mini-revolt and said, green. I wanted a green wedding sari. And that is how I came about getting married in a green sari at 23 years of age, just like my dream at 18 had prophesied I would.

What has all this got to do with the green salwar-kameez that I am thinking of consigning to ignominy?? Nothing at all; rather all I was trying to say in my rambling way was that I am not for or against any particular color and hence the color green is not the reason for considering ‘consigning to ignominy’ with reference to said dress. The problem lies elsewhere. The green salwar-kameez seems to be bugged. No sniggers please. It truly is.

The last time I wore it, a bug bugged me by making my ear the subject of its research and I had to go traipsing to the hospital to get myself un-bugged. The next time I wore my green dress, a bug of a different sort bugged me, making me reel and throw up and having to be rushed to the hospital to see the modern equivalent of a medicine man to be de-bugged and made whole again. Of course I am not superstitious. The very idea! But can you really blame me if I look at said salwar-kameez with suspicion and trepidation??

28 thoughts on “The bugged dress”