Have you seen ash gourds growing on electrical wires? Well, if not, take a look and read its story as well.

This plant started off on the ground like any other,  and gradually rose to spread itself luxuriously on the roof of a shed nearby. Not content with this rise in station within its own territory, the ambitious vine set its sights on the electric wire connected to the street-lamp pole standing in the street. If only it could reach the wire and from there reach the pole beyond! After all being queen of your home was nothing when compared to conquering the world… umm, I mean the lamp pole in the street.

‘Onward march!’ the vine ordered the tendril-army at its disposal, and they on their part marched onward as one, obediently. There was no one to challenge their progress, the humans in whose care it supposedly was being negligent and unaware of the plant’s ambitious moves. The tender tendril army stretched out and latched themselves on to the sagging electric wire. Success! From then on it was easy. They only had to wrap tender tendril arms around and move forward, one tendril roll at a time.

The tendrils were growing stronger, and giving birth to more tenderest tendrils to take their place and lead them on. Soon, very soon, the vine reached and claimed the pole for its own. Aha! Now it was time to put out flowers and fruits and survey the world or that part of it visible from atop the pole. And hello! What’s this? We have a personal source of light as well, which comes on at night, and no bills to pay either. The vine was mighty pleased.

Unbeknownst to the vine, its ascendance was being watched with trepidation by a human living across the street. Wha…….? she thought. The vine’s owner was promptly intimated about the errant (and ambitious) plant with designs on neighboring territories and an agenda of world domination (well, one never knows!). Not my job, dismissed the owner, washing her hands of responsibility. The human across was nonplussed. Then WHOSE responsibility was it? she wondered. Some teeth-gnashing happened in private and hands were thrown in the air in a dramatic manner, not to mention eyes being rolled theatrically. Some people, gah!

Meanwhile the ambitious plant had set its eyes on ‘attacking’ and attaching the house opposite to its territory. ‘Onward march!‘ it yelled to the new batch of tenderest-tendrils and they obeyed, implicitly, climbing the wire bringing broadband connection to the human in the house across, as also the power line (that brought power, duh!). The human meanwhile was alarmed and agitated at the impending onslaught. My internet! My power! She wailed. What would happen?!! What if…? She recruited the help of the Knight-in-Ordinary-Clothes.

Calls were placed to the Plant-and-Tree-Cutter-Kinghts of the Power Department and they arrived with weapons, long poles with sharp knives attached to them. They cut down the by-now hefty fruits one by one. Thud. Thud. Thud. Thud. Thud. Five of them fell down. Next it was the turn of the vine. The end was swift. The vine’s ambitions were cut by a cut to its gut. A few straggly tendrils were all that remained on the wire to remind that once an ambitious vine had walked this path.

Well, my intention had not been to make a story of this, but that’s how it came out when I started writing. My question about the whole thing is, how can people be so blase when a plant/tree from their yard encroaches on public property? How about taking some responsibility and having them trimmed and/or diverted? Where is your civic sense? 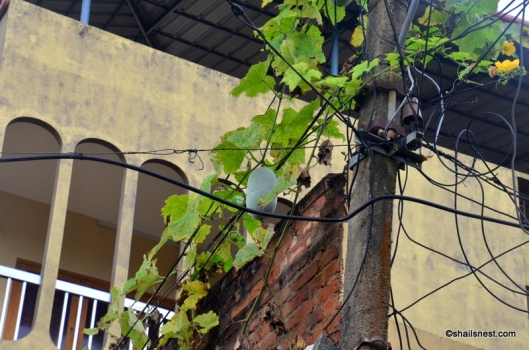 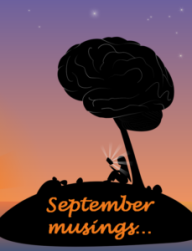 2 thoughts on “The ash gourd story”