There are a lot of lessons mother tried to din into my head while growing up, and I in  turn have spent time unlearning most of them and starting afresh. The rest I dumped unceremoniously by the wayside as useless to me. But there is one, not exactly dinned but casually mentioned, which I took to heart and followed, if not diligently, then at least unconsciously, to the letter.

And that’s the lesson on how to write an essay.

There’s got to be a beginning, an introduction to the topic as it were, a middle where the topic is threshed, and an end where you summarize and conclude, she explained in one of her expansive moods. Having done her graduation in History, and being a rank holder at that, she was unquestionably an expert in her field. Hence, at fifteen, about to step into college, I took her word for it.

In addition to the beginning-middle-end lesson, she let drop another nugget as regards the matter of essay writing. You got to get them with the first sentence, she said. The ‘them’ here referred to the teachers who would read and grade the written work. Their work involves grading innumerable exam papers, they’ll be bored of reading the same stuff over and over, and skim through most stuff, which means you will lose out in spite of a well-written essay. If you want yours to be noticed in the sea of exam papers, you should make them sit up WITH YOUR VERY FIRST SENTENCE.

Made perfect sense to me. I was reminded of what happened in the Social Studies class in tenth grade.

The Social Studies class was taken by a middle-aged lady named Shanta who was also our class teacher. Shanta Teacher (as we called her), combined the right amount of firmness – you couldn’t fool her, not that I ever tried since I was a totally Miss Goody Two Shoes back then, as I am now – with compassion and excellence in teaching. In short she had the iron hand in the velvet glove approach towards the girls in her class. Her classes were a delight, at least they were to me. Most of my classmates groaned when they heard the word ‘history’ but I found it absolutely fascinating (still do). In fact, Shanta Teacher’s classes succeeded in sparking my interest enough for me to opt for the subject in college.

As part of the curriculum for tenth grade, we had to study about the French Revolution and when the day of the test dawned we found we had to write an essay on it. Borrowing from Baroness Orczy’s The Scarlet Pimpernel which we were reading in English class at the time and had impressed me much, I began my essay with a sentence that included in it ‘the commoners were crushed under the scarlet heels of the buckled shoes of the nobles’. Sorry, I don’t remember the exact sentence I used to open the essay. But those of you who have read the book probably recognize the ‘scarlet heels of the buckled shoes’ bit.

On the day the corrected test papers were to be handed out, Shanta Teacher walked briskly into class as was her wont. Settling herself down at her desk, she asked, “Who is Shail— V?” (There were two of us, relatively new to the class and with the same name, but different initials) My heart sank. Oh no. What had I done now? I raised my hand, a shade diffidently. She gave me an inscrutable look, nodded her head, and went back to distributing papers. Eventually, I got mine and found I had done pretty well. So why had she singled me out, I wondered. When she was done with giving out all the papers, Shanta Teacher looked at the class and said: ‘I want all of you to take a look at Shail— V’s essay. For one she hasn’t learnt anything by rote and spit it out. It is all written in her own words. And also check how impressively she begins her essay.‘ (Okay, I am blushing now as I write this!)

What struck me was how I had unknowingly used mother’s same technique back in school and scored. That sort of reinforced my faith in her lesson. Over time, I have mostly stayed true to the beginning-middle-end way of writing, with occasional forays into abrupt ends, spurred by the desire to finish and be done with it. But when it comes to fiction and/or poetry, it is a different matter altogether. I mostly always plunge right into the middle of things, and take it forward from there. I have been criticized for doing it by ‘well-meaning’ people. Not the way to do it, others have observed. But, how can it be YOUR story/poem, truly YOURS, if you don’t write it the way you want to? 🙂 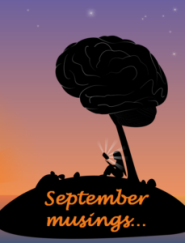 2 thoughts on “A lesson remembered”