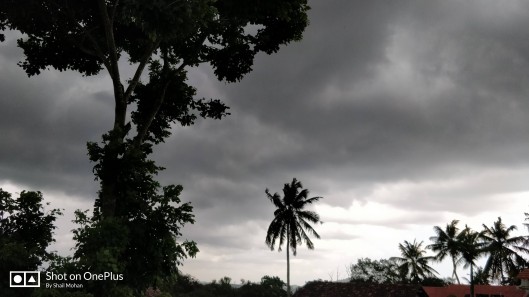 I have been away far too long from my blog. A few of my readers have even messaged asking if I am okay.  Yes, I am. Safe and sound as well. But many of my fellow beings weren’t these past weeks, displaced as they were by floods. By now, you must have heard/read of the incessant rain that pounded our small state of  Kerala in southernmost tip of the Indian sub continent, a rain that was way above normal than our region is used to. Floods we do have every now and then,  after all it rains six months or more in a year, but this time it had been on a scale inconceivable.

If you remember, a while back, I had written about an imaginary conversation between the sun and clouds, where the clouds won hands down. Little did I know at the time they were going to take it to an altogether new level. The clouds only got more and more powerful in the following days, and brought down a deluge on us, the worst in almost a century. For the first time, sluice gates of thirty-five out of forty-four dams were opened, one of them at Idukki was being opened for the first time in twenty-six years! The rain and the overflowing rivers wreaked so much havoc, inundating large areas, forcing people to evacuate their homes. It was in 1924 last that we in Kerala had a calamity of similar proportions.

This time around the rain has left more than three hundred dead, around forty missing and close to a million people, displaced. All the fourteen districts of Kerala were on red alert at one point of time. Fortunately, my district was the least affected and was soon off the red alert. And since I stay on higher ground, I was better off than most. Other than having to watch the pouring rain day in and day out, there was very little to worry or be scared about. Sadly so, not so lucky were my brothers and sisters. Many were trapped in their homes and had to wade through chest high water to get to safety. Others were dragged to safety by loved ones who knew swimming. But the majority were saved by motor boats running on what used to be streets. Then there were the helicopters which rescued those trapped on rooftops, a pregnant lady who was airlifted from a flooded village being one of them.

The Navy, Army, Kerala Police, Kerala Fire and Rescue Services were all involved in rescue operations. So were our local heroes, the fishermen. Their boats and strong swimmers went were others couldn’t and rescued stranded people. Fishermen have become  our superheroes, Superman, Spiderman, Batman all rolled up into one. When I talk of our superheroes, the fishermen, I cannot but mention one particular fisherman, Jaisal K.P., who let people step on his back so they could climb on to the rescue boat. The video left me speechless and teary-eyed with gratitude for the goodness of his heart. Later I heard him speak to a radio jockey on one of the local FM channel. When she praised him for his act, he said it was nothing much, he wanted to help that’s all, he in fact knew others who had done much more than what he had.

Then there are the countless others with no names or affiliation to any organisations or groups or political parties, who just went out and helped those in need, walking the murky waters and rescuing those stranded, as well as helping out in the many relief camps. The young rose to the occasion much to the surprise of the older generation who only thought of them as involved with themselves and always peering into phones and/or laptops (an opinion with which I have never ever agreed), working hands on, on the field and also organizing and coordinating relief work online.

Help has been pouring in from all around to our tiny state, though there are instances of unwarranted tightfisted nature on display from those quarters who instead of going all out to help suffering fellow-countrymen as is their duty (and our due) want instead to talk dirty politics. Then there are those shit-bags who have gone on a frenzy to denounce us  on social media as ‘beef-eating people’ who have brought the ‘well-deserved’ calamity on ourselves. Some of the other ‘creative’ reasons given out are that women have requested to be allowed to go to a temple of a ‘celibate’ God (only girls below ten and women past fifty are allowed there as of now), that we have a large number of Christians and Muslims living in our state, and of course, that we haven’t voted the party in power at the center. Yup, apparently, we ‘deserved to die’ (and also did not deserve aid) because of these stupid reasons.

For every one of those cruel tweets and memes there are innumerable tales of compassion for the suffering people of Kerala. There is the one of the little girl who broke her piggy bank, another little one who sent all her saving of four long years to buy herself a Hero cycle (the company is gifting her a cycle for the goodness of heart she showed), there is the old woman, poor herself, who stopped a relief worker and gave her a few crumpled notes saying “Daughter, please give this to the people who are staying in the relief camp“. There are the good people who were stranded on first floors who waved away the boats that had come to rescue them, asking them instead to first rescue those whose houses were single-storied and hence were in a worse position than them.

We Keralites or Malayalees, do have our fights, our petty back-stabbings, our little jealousies, one-upmanship’s, small tiffs or soundarya pinakkangal as we call it locally. That’s like anywhere else, I suppose. But you know what amazed me this season, what made my chest swell with inordinate pride? How we became One People in the face of the tragedy that befell us. Our leaders were seen with the people lending a helping hand, the leadership was exemplary, the opposition and ruling side worked in tandem, the district collectors did a commendable job, each and everyone forgoing personal comfort, did what they possibly could. And the common people, lent each other unflinching support. Like everywhere else there are some who aligned themselves with the ‘outsiders’ taunting us even in our state of emergency. We call such types paara in our language. They are like bandicoot rats digging the ground trying to bring their own house down. Shameless, really. But they won’t succeed. We won’t let them.

The rains have stopped now and the sun is out. The sluice gates have been closed some days back and the waters have receded too. But our work is not done. Houses and lives have to be rebuilt. Animals and livestock have died, crops have been lost. Children have lost school books and bags. Many have lost everything other than what’s on their backs. Houses are filled with mud and silt and need thorough cleaning. Care should be taken that diseases don’t break out. There is so much to do. It is a long and arduous path, especially since our loss runs into several crores and the necessary funds, have not been forthcoming, and don’t look like they will. Dirty politics, again. But we’ll do it. We will overcome. We have to.

*This post is very inadequate and a very limited personal view considering the magnitude of the tragedy and the many stories of courage and compassion it spawned. Do Google for more.

**The picture above is from a couple of days back when we had some light rain yet again which actually is quite normal.

11 thoughts on “When it poured”