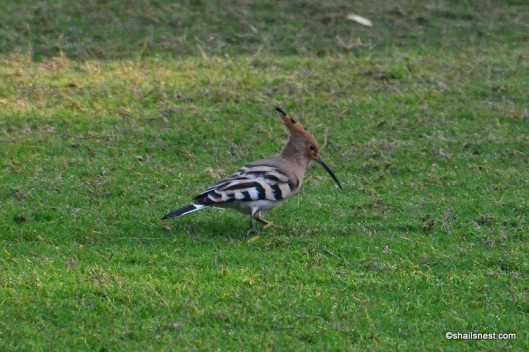 Today, I was at the Qurum Park, my favorite place on account of the birds that can be found there. Of course the trees and the flowers too are a delight. It’s amazing how you can walk in the park with so very few people around and still feel safe here in Muscat, even when it is just the two of us, myself and my sister. This is quite different from how it is in India where we would have had to contend with people staring at us as if they had nothing else to do. Anyway…

There I was among the trees, and flowers and the birds, remembering the places where I had seen the different birds the last time I had been there two years back. When I reached a particular tree, my eyes searched beneath it for the pair of Hoopoes. Silly as it sounds I had seen them there during my last visit in 2016 and almost expected them to be waiting for me still beneath the same tree in 2018!

On the earlier occasion, on chancing upon two of them for the first time (I am ashamed to admit this), I had excitedly squeaked out, ‘Omg! Hoopoes!!!!!’ and startled the pair into flight, ending up with a blurred photo.

This time around, we were on our way back having made a round of the park when my sister nudged me and said, “There’s a bird over there behind the bush which looks like a zebra!” From her words I knew it!

It was a Hoopoe!

Not about to make the same mistake over again, I quietly crept closer and took some pictures. The victory dance would have to wait for later. The bird did pause in between its furious pecking at the ground with its long and sharp beak, looking for food. It seemed not too concerned about the clicks from the camera as it went right back to work. May be this one was a star and used to the paparazzi.

4 thoughts on “Face to face with a Hoopoe”