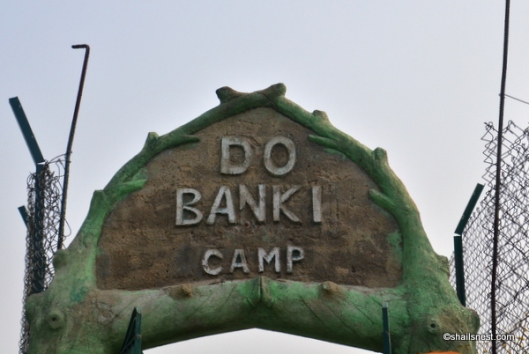 At the Do Banki camp in the tiger reserve at Sunderbans, there is a raised walkway and a watchtower from which you can look for signs of wildlife and if you are lucky, spot them too. Deer come to drink the freshwater available, and if really, really lucky, a tiger too. We though, were lucky enough to see other life forms.

There was a crowd at the watchtower, people going up, some coming down (the same way hence no order and a bit of a jam), and in the viewing platforms, competing with each other to get a good view (as also to take selfies!). I had just spotted a couple of monitor lizards sunning themselves, and having taken their picture stood there watching the Purple Heron taking slow measured steps. It looked as if it had spotted prey and was closing in on it.

Just then, I felt a hand on my shoulders, all five fingers holding my left shoulder. I was then firmly moved aside while the person took most of the space available. The confident way I was held and moved aside, I assumed it was my brother who did so because he wanted to have a better view to take pictures. Imagine my surprise when I looked to my left and found the person to be a total stranger.

This after all, is India, and not even urban India. One doesn’t go around laying hands on unknown women unless you intend to harass them. My first reaction on seeing the stranger had been a, ‘What the heck!’ muttered to myself. I looked at him, trying to catch his eye, give him blazing look and watch him curl at the edges as he burnt. But his face was turned away from me. He was busy craning his head this way and that, scouting the area for wildlife. It was as if I did not even exist. Was he pretending?

I am by no means young and have gray hair on my head to prove it. But then gray-haired women face problems in public too, in India. The cheek of the fellow, I thought, daring to hold me by my shoulders and shove me aside (albeit not rudely). And now there he stood, right next to me, acting as if nothing amiss had happened, that it was all quite normal. A few teeth were ground. But I was puzzled by the whole thing too. Anyway, I moved back (he had usurped most of my place), and returning to find the brother and sister-in-law, filled them in on what happened, and then put it out of my mind.

I must have walked a few feet when it hit me. That was it! How could I have not guessed. And when I told the L&M he couldn’t stop laughing. Apparently, the fellow had thought I was one of them. THEM, you know, as in ‘men’. What with my short hair and the black jacket I wore, anyone could have made that mistake standing behind me. That was why the confident hand on my shoulder and (naturally) not thinking anything about it. I am betting he would have got a shock if he had looked back.

So now the L&M makes fun of me. It is going to happen again, he says by way of warning, trying not to grin. Someone’s going to slap you on the shoulder and ‘Hi-buddy’ you, asking you to move over and make space or something of the sort. Don’t lash out at them or maul their eyes out! Poor fellows, they’ll only be trying to be friendly thinking you are one of them.

An Oriental Magpie Robin at Do Banki Camp 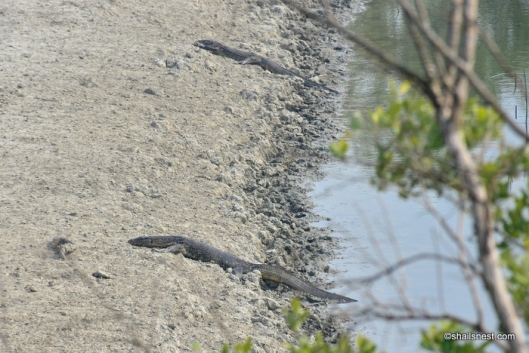 Seen from the watchtower: Monitor lizards sunning themselves

8 thoughts on “The man who pushed me aside”