The word ‘grasshopper’ immediately brings to mind a picture of one wearing huge sunglasses, in a flashy outfit, with chains around its neck from which dangle shiny pendants, with a guitar in hand and ready to burst into a song at the drop of a hat. Phew. That’s some picture, eh? It is all due to the story we were told us children, how the grasshopper spent its summer singing and dancing and generally having a good time instead of working hard and gathering stuff for the harsh winter ahead.

In contrast where the ants. In my mind they were the studious types, minus glasses. I know, that’s a very misleading picture. Glasses equals studious. Baloney, if you ask me. I wear glasses now and I am as far from the studious type as can be. Anyway, there you have it. All this was the result of the same story, where the ants worked industriously all summer and when winter came had plenty to eat.

Personally, I had/have a problem with the story and do NOT agree with its premise at all. We must work hard, no doubt. But we must ALSO find time to sing and dance and generally waste time. What’s the use if in anticipation of a ‘harsh’ winter all we do is work and not take time to look around and enjoy summer? And then when winter comes around and just as we think here at last is our time to sit back and relax by the fireside and partake of some of the things we have saved up, we simply drop dead.

Yeah, think about that. What good is all the saved stuff if you are dead?

Unlike my previous generation, I don’t go hammer and tongs at the younger lot to forgo everything and save up for the future. Enjoy your life NOW when you can. Don’t forget to do the things you like, I remind them. What if a meteor is even now hurtling earthward? WHAM! POOF! GONE! A fat lot of good it will do, all that saving in the bank. So think about it, and once in a while empty that bank account and do what you have always wanted to. BE A GRASSHOPPER. 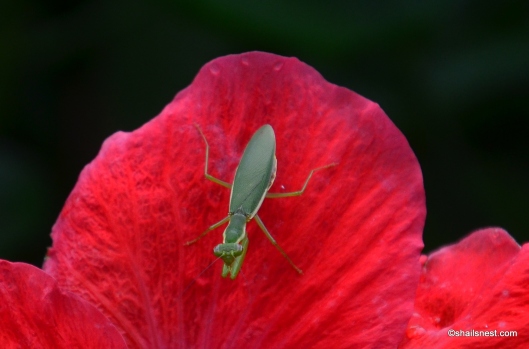 There is a second picture that comes to mind at the mention of grasshopper, the reason for which is of a more recent origin, that of a man swallowing a grasshopper whole. To know why, you’ll have to read this post: Funny Invites.

I am not sure what kind of grasshopper this one is (or whether it even sings and dances and parties all summer) since I am not into grasshoppers as yet, only birds and butterflies. But when one came along and posed so eagerly, I simply had to capture it. 🙂

Updated on 10/06/2017: Well, whaddya know. This here is a Praying Mantis as my friend Anne has pointed out in the comment below. And with that comes the realization that this post actually has lost relevance since there is no evidence that Mantises play the guitar and party the summer away.  Omg! A thought just occurred to me. WHAT IF the Mantises file a defamation suit against me? The mind boggles. Let me take leave of you to go grovel before the one in my garden and tell it to put in a good word, several in fact, for me! 😉