The Rufous Treepies and I have a thing going. They make their various calls and I mimic them note for note. I am not sure if that makes me popular with them or has got me marked as deranged-human-to-watch-out-for. Probably the latter because at times I can hear the surprised silence. Who cares, I am having my share of fun at their expense. Or am I? Look who I found hiding in the branches of the jackfruit tree, today. 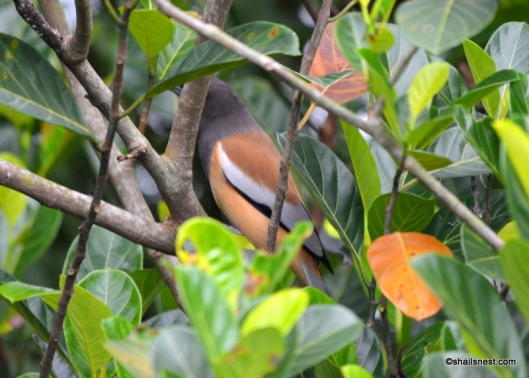 Yes, a Rufous Treepie, probably sent by the higher ups in the Rufous Treepie settlement to spy on me. Find out, they told him before he set off on his mission, and here I am purely speculating on the workings of a Rufous Treepie’s mind having never been one myself, if that impertinent human still mimics our calls. Don’t let her see you at it, they must have added, which explains why I found this one concealed among the thickly growing leaves of the jack-fruit tree.

I waited patiently for him to make a move. Sure enough he did, curiosity having got the better of him. Who says it is only cats who are curious? Lizards are for one, with disastrous results, getting burnt to a toast for it. So are Rufous Treepies as far as I know, I mean curious, not getting burnt. Hence it was no surprise to me when I saw him skitter higher up the branch to take a better look.

His curiosity had peaked hearing a click-click. He had a report to make, didn’t he? So he had to know what the mimic lady was up to now, going clickety-click. He climbed some more and that gave me an excellent opportunity for a clearer shot. Of course, he was startled and promptly flew off to a different branch where he could be better concealed while spying on me.

When he flies back to his waiting mates at the settlement, the Rufous Treepie makes his report, though a trifle informally, due to his excitement.
“Hey guys!!! You gotta hear this.”
Eyebrows rise. Please don’t ask me if birds have eyebrows. This is poetic licence at work here. So, as I was saying, eyebrows rise. Is this what the present generation has come to, they imply collectively. Yup, birds are probably no different from humans in blaming the next generation. Unaware of it all, the Rufous Treepie continues,
“Forget about her mimicking us, birds. Minor thing, yaar.”
They look at him askance, a look which he catches but ignores and continues:
“She has this black thing hanging around her neck, you know, and she actually shot me with it…”
At this point the whole settlement sort of goes ‘Ooooooh!’ Someone swoons, and someone else pecks him roundly on his backside.
“Ouch!!! What was that for?!” he asks, justifiably annoyed.
“Nothing, just checking if you are a ghost!”
“Ghost, my foot. She didn’t shoot me, dumbo! She shot me!”
There is probably absolute silence all around.
“What? No, I mean it’s not like it sounds. Shit! Here let me explain…”
And he does. Realization dawns on the assembled bird faces. She shoots, but doesn’t shoot, and also makes you famous. Cool, right?

Yup, that’s about it. But, sigh…. If only all this weren’t solely the product of my fertile imagination, right now I’d be preparing to welcome the whole Rufous Treepie flock for the photoshoot tomorrow.

On another happy note, there was a new visitor today, also on the jackfruit tree, an Ashy Drongo. This is the best shot I could manage with the sun on the wrong end and him not being very co-operative.

He’ll probably return. I shall be waiting. 🙂