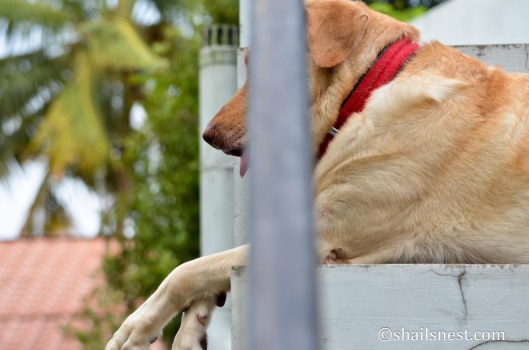 It’s official. The birds don’t like Luci and Luci does not like birds. I, on the other hand love both Luci and the birds. Sort of a complicated situation to be in, right?

I first noticed the bird kingdoms’ animosity towards Luci when the crows started hurling curses at her as soon as she was out of the back door and walking around in that officious manner of hers in the backyard.

Luci’s attitude towards birds (and cats) is something like this: This backyard belongs to me, you hear, you morons?! So does the front yard, the house, its inhabitants and whatever else is inside. And while we are at it, the road that’s in front of the house is also mine.

Luci considers each time of including the airspace above in her list but changes her mind as it would add too much weight to her already *heavy* attitude. Or perhaps it is because she is worried about the Big Dog In The Sky that growls at her and also dumps barrels of water on her, her house and surroundings. So she merely signs off her outburst with a, ‘Get that you wily thingamabobs with wings and the whatchamacallits that mew!’ and then to seal it good and proper, a ‘Bowowowow!’ too is added.

The birds (and the cats) at first, merely raised their eyebrows at this brash behavior. What do you mean birds don’t have eyebrows? Of course they do, imaginary ones, and they raise them too when confronted with the snooty attitude of dogs. Anyway, they, the birds that is (of the cats we’ll talk another day), dismissed it all as harmless bravado exhibited by over-enthusiastic and hyperactive dogs, and went about their business as usual, sipping honey here, catching a dragonfly there, relishing a worm, pecking at a ripe guava or mango.

The Crows have different ideas when it comes to their diet. They like to eat human food and started taking an interest in the leftover rice and meat from Luci’s meals.

That was the beginning of Trouble.

I may be a fussy eater and not finish my food, but you beastly crows are not having one measly rice or crumb of roti from my lunch, said Luci.

She kept watch diligently, and pounced on the crows when she thought the time was just right. But crows are smart. They flew away alarmed at her approach, but cackling at the dog’s audacity in thinking that it could catch them. Them! Crows? Ha ha ha. You have another thing coming, you fool of a dog. Don’t you know we are intelligent beings? Ask your Momma. She has read the article on the study which says so about us and what’s more, she shared it on Facebook too. Hyuk, hyuk, hyuk.

Luci didn’t think it was funny at all, the crows making fun of her. She increased her vigilance. Not only that, she started mowing down whoever or whatever stood in her way in her attempt to get at the crows. Her Momma had already been a victim of Luci’s Run At The Crows Unmindful Of Anything In The Way in the past. So for the humans in the house it was, ‘be Careful! Watch out! Take cover! Here comes Luci The Hurricane!’ Quickly they would hang on to something strong and immovable to steady themselves and not be swept off their feet and into the vortex.

After a while the Crows stopped finding it amusing. I mean there is a limit to it all. This was carrying dog-in-the-manger attitude a little too far, they felt. Neither would that dog eat nor would it let them eat. They began plotting revenge. Sitting on the wall, they hurled abuses at her. Swooping down unexpectedly they tried to get at her tail.

Not only that. I have a strong suspicion they have got the other birds involved in this whole War Against Luci affair. First it was the Bulbuls that came aknocking on the windowpanes annoying Luci considerably, making her lose sleep. There she would be, sleeping peacefully, dreaming of whatever dogs dream of when the tapping would start. Luci would immediately jump to investigate, poke with her nose at the window pane and bark as loud as she could at the Pesky Things Disturbing A Dog’s Sleep that the top of her Momma’s head would burst open and she would go deaf for a few seconds.

Now, the Sunbirds and even the Tailorbirds have joined in, sent by the Crows no doubt, to wear the dog down. The Mynas are just waiting to join. You see, they like sitting on the balcony wall and chatting loudly, but Luci has put an end to all that.. So it is just a matter of time before they too join the Crows against Luci. As for the Rufous Treepies they have been simply waiting for something like this to happen.

The tussle between dog and birds is hotting up and I find myself spang in the middle of the two. I can only hope things do not spiral out of control, because if they ask me to take sides, I will have to choose Luci.