Today is a special day as far as I am concerned. This day, many years back…. But let me first talk of yesterday before I jump to today or its significance for me however far back in time it may be.

Yesterday we, that the sis, brother-in-law and I, went on a long drive, from Muscat to Sur. We, listened to songs, sang along, talked,  laughed, took pictures and ate lots of chips along the way. The scenic beauty on the way was absolutely stunning. The texture, color, look etc of the mountains all differed and made it all the more interesting. Some looked like giant dinosaurs sleeping and other smaller ones like piles of dinosaur shit according to my sister. But they all looked beautiful, especially the ones afar, covered in a purple haze. And then the sea burst upon us, taking my breath away with the white crested blue expanse of it stretching away into the horizon.

Soon driving along the Pebble Beach, we reached our first destination, the Hawiyat Najm Park which has in it the Bimmah Sinkhole (also called Dabab sinkhole being in Dabab village) described as the world’s most stunning sinkhole.  Sinkholes are depressions or holes in the land surface. The reasons could be natural like erosion or gradual removal of slightly soluble bedrock, the collapse of a cave roof, falling of the water table etc. It could also be the result of human activity: due to the collapse of abandoned mines, water main breaks or sewer collapses when old pipes give way etc.

Bimmah Sinkhole was going to be my first and so I was extremely curious. The local legend has it that it was caused by a meteor falling at the place. The Arabic meaning of the word, misleadingly so, implies the same. Bimmah sinkhole was in fact created due to natural reasons, limestone erosion and the collapse of rocks.

As soon as the car was parked and I stepped out, what do I see but a fat little bulbul sitting on the green-painted fence. It flew away before I could capture it. In fact throughout the time I spent at the park, they teased me flying from tree to tree, never letting me catch even one of them with my lens. Hrrrmph.  Unlike them,the Bimmah sinkhole was very cooperative. It stayed put and let me photograph it alI I wanted. So, it gets star billing in my blog today. So there, naughty bulbuls, you! 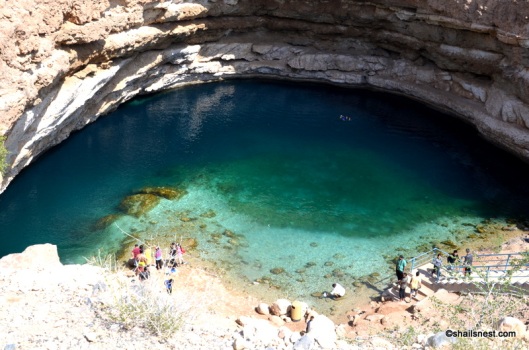 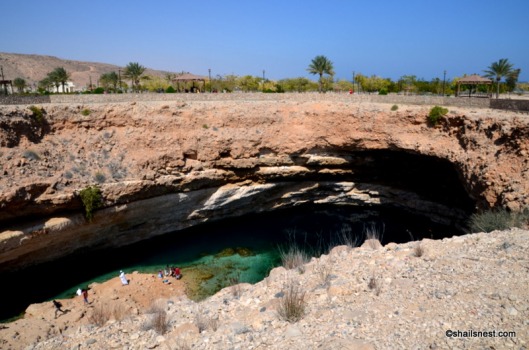 You know what it reminded me of? Enid Blyton, the Famous Five and their adventures. I could almost see the five cousins having an adventure involving the Bimmah sinkhole.

The color of the water was stunning. I don’t think my pictures do justice to it. There were people swimming and others who went all the way down the steps. No, I was not one of them brave ones. Sigh. One has to respect the wishes of one’s legs, they are to be used and not abused. Next we went to the Pebble beach. But since it is time to go out and see more stuff, I have to stop here and start getting ready. So what’s left  has to come later 🙂