There is something about a sunny day in the middle of the rainy season. The brightness of the sun after days overcast skies, hurts the eye, and yet cheers you up considerably. It is not too warm, not at least for those sitting indoors. The sky is a startling clean blue, as if freshly washed and stretched above for the benefit of those who have been for days together seeing only shades of gray (not to be confused with that horrible, horrible book), ranging from the mildly dirty to the ferociously awesome. Sometimes itsy-bitsy fluffy clouds dot the sky, clouds not yet old and gray enough to pour down, who just stand around daydreaming of the day they can.

With the sun shining, the greenery looks achingly beautiful. Having been washed repeatedly in the the previous days they look spotlessly clean. They also look lush, satiated and happy. They have drunk enough of the magic elixir that is water and now they eagerly drink in the magic of sunshine.

The summer rains have been bountiful this year that the gulmohur tree lost out on the opportunity to show off the stark beauty of glorious red flowers on naked branches without the green feathery leaves to distract. Almost fully clothed in green, it now has a few red flowers on the top branches.

The birds, and the butterflies are out in full force to make most of the sun. Tomorrow it might rain again, so lets make the most of today, seems the cry. The birds sit around grooming themselves, extending wings and drying them, fluffing themselves out and preening. The Sunbirds chase each other, chirping lustily. The magpie-robins are found everywhere, their population around my house having suddenly grown this year. They peck at insects among fallen leaves on the roof, or on the ground, in flower pots. The Coucal too wants a piece of the action.

The ever present Kingfishers perch on trees in their glorious blue. The Yellow-billed Babblers have made a comeback after an absence of almost two years. The three new Bulbul chicks are fascinated by the glass panes in the window. They come a-knocking, annoying the dog who takes her duty of guarding the house part very seriously. She barks madly at them, but the bulbuls seem unafraid, only curious. They tilt their head to one side and stare wide eyed at this creature with a too loud and booming voice. 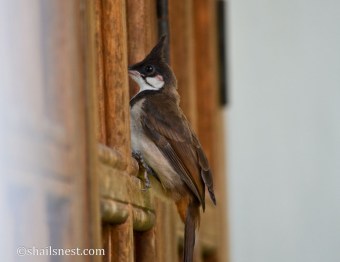 When she is not barking at stupid birds that do not know enough to be scared of her, Luci too makes most of the sun. She walks out of the house, sleeps in the sun and also rolls on the grass in gay abandon. Her mom does the same, I mean makes the most of the sun, not roll on the grass. She, the mother that is, puts the clothes out to dry. Then she sees it, a Gray Pansy. She has not seen one of them around her house until now. She is happy that the lantanas she planted are giving dividends. She quickly turns and rushes inside the house for her camera. When she looks down from the first floor to check the butterfly is still on the plant. Not one to take chances, she zooms in and takes a couple of pictures before walking downstairs.

And thus we open July. See you all on ALL thirty-one days this month. Hopefully 🙂

11 thoughts on “When the sun shines in between rains”