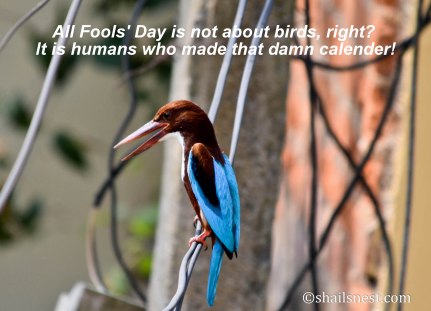 Today is not only the first day of the A to Z Challenge, it is also All Fools’ Day. That got me thinking on how I have escaped being fooled on this day, not on gargantuan scale at least, all these past years. I know! I am rather tempting Fate by saying that aloud. Anyway, methinks the reason is that not only am I extremely cautious by nature (who lugs around a sackful of salt), but I also have a well-developed sixth sense. And you thought that was just frizzy hair on my head? Outward manifestations of inbuilt radars my dears, that pick up signals that you normal people give the go by. Ha!

I can, if I may say so, smell a rat, or let me amend that, for who in their right minds want to inhale rodent-y smells, I can sense a rat even before the said rat has made up its mind to make its presence felt. Impressive, huh? Of all the fellow passengers in the bogie A2 of Madras Mail chugging along its way to Chennai on February 25th, I was the only one who had the presence of mind to pull up her feet on to the seat opposite when the rat (okay, mouse!) appeared out of nowhere. You see what I mean? I knew! And yet (sigh!) there is someone who fooled me and that too without the intention to do so, without my being any the wiser for years and years.

Let me introduce you newbies to the L & M, or the Lord & Master. Don’t you be fooled into thinking, like that silly person who was, that he lords it over me at home or that I wait on him hand and foot just because I call him the L & M. This is just a cool name I came up with for use on my blog and which it seems is such a hit that it is being borrowed left, right and center. Well, that’s beside the point, so let me get back.

Mere days into married life, the L & M told me, the chipped front tooth of his was the result of biting off the pin from a grenade, yes those very thingumabobs that go kaboom when thrown. You mustn’t be harsh on me for believing him, people. How could I not? I was young, naive and all wide-eyed admiration for the brand new husband, a handsome Army Captian, no less. Ours by the way, had been an ‘arranged’ marriage that from planning stage to execution took just two weeks (or less). I knew zilch about him, and he of me. So it was easy for him to rope in pins and grenades to impress the young wife and for her to be easily impressed.

Almost a quarter century later, one afternoon he was recounting some childhood escapade. Pointing to his broken front tooth he concluded his story,

“That’s how I broke this one.”

“What? What about the grenade pin you pulled out with your teeth?” I asked.

“Grenade pin?!” he asked astonished. “What grenade pin are you talking about?!!”

“You told me that’s how it broke!”

“I told you that?!” he asked in surprise, a bit wary now. “Of course not! I broke my tooth when I had a fall as a child!”

He of course knew I have an excellent memory, that I don’t exaggerate or add frills to anything, never ever, and I certainly do NOT make up stories even in jest. I had not yet started writing fiction back then. If I said anything to be so, it definitely ought to be so. Even my children know that.

By then another thought struck me and I asked him suspiciously,

“So what about that mark below your knee?”.

“But that’s not what you told me!”

“Oh well…” he smiled sheepishly, “I might have said all that to impress you. It was so long ago.”

Egad, he said *m.i.g.h.t*! He did not even remember having said any of that! Really! What’s the point of fooling someone if you don’t even remember it?! Hrrmmph. But isn’t it really funny for someone to blurt out the truth unknowingly to the very same person to whom they had told tales? So who fooled, and who got fooled here, or do we make a pair of fools?!

Happy All Fools Day to all. Stay fooled. It is so much fun.