The earlier parts in the Bali Journal.

The sky had cleared up a bit when we left the farm behind and continued our drive. I must put in a word here about the roads in Bali. They are really in excellent condition. I am not sure if it has something to do with being tourist routes, but whatever, it is a smooth ride.

“Where to now, Arjun?” we asked our driver.

“Kintamani, Kintamani!” he replied in his singsong way. “We see Batur. Mountaaain! Volcanooo!”

“Ahh! Volcanooo!” we echoed excited, at least I was, never having met seen one so far in my uneventful life, the regret of having left the farm behind mitigated somewhat.

We were now slowly climbing higher and higher from sea level. On either side of the road was lush greenery. The grey mist was swirling in, obliterating everything below on one side. That gave the awesome feeling of travelling on a road hanging in the sky. The sense of isolation becomes complete whenever yours is the only car racing along the road.

Kintamani, where we were headed, sits on the rim of the huge Batur caldera about 1500m above sea level, and offers dramatic views of the now dormant volcano Mount Batur and also the serene Lake Batur, (Wiki). It seems the volcano was last active in 1964. Not that far back, huh? What if it chose to become active again on the very day we reached? Ooooh! I let my imagination run wild, thinking up all sorts of Hollywood movie type scenarios. I wondered if all my matters (what matters anyway?!) were reasonably well settled in case I never made it back home. Was there something left unsaid/undone? Any regrets? Sheesh, why hadn’t I called up the sons just before I set out for Bali? I wondered idly if that could be the start to the world ending. I mean if it could be 2012, it could be 2013 too, right? Maybe it had been just biding its time for me to visit the Mount Batur viewing area.

The car stopped and thankfully, so did my wild imaginations. We had reached our destination and as luck would have it, it had begun drizzling again. My camera was put safely back in the bag. I then slung it over my shoulders and walked up the steps of the Grand Puncak Sari with the sis and BIL.

I have since found mentions on tripadvisor.com that it is nothing but a tourist trap, that the food is not all that good and all that. But who is worried about food when the view from the restaurant is SIMPLY AWESOME!

That’s my sis gazing at the awesome view and Mount Batur in the distance. 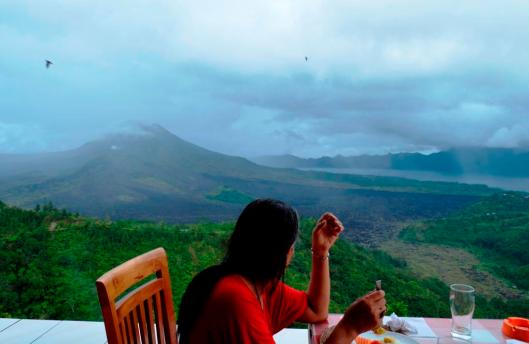 This is Lake Batur veiled by mist, alluring and mysterious.

I couldn’t stop clicking. Food was the last thing on my mind though it was pretty late for lunch. 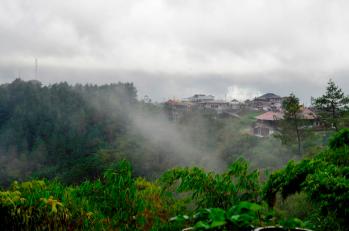 I clicked pictures to my heart’s content before I sat down to eat something. Yeah, the reviews are right, the food was nothing great. But the view definitely compensates. In fact if it had been a clearer day, I could have got even better shots. That day rain and mist obscured the view of Mount Batur. But then there is a different charm and a certain mystery in a volcanic mountain, as also the countryside, that is lightly shrouded in mist. Isn’t it so?

By the time we got up to leave, Mount Batur was totally hidden from view. So there was no last click or a final look. It had started raining too as we drove away from Kintamani. Not so good. Looked like we might not be able to see the famous terraced rice fields. But when I inquired of Arjun, he brushed it aside with a,

“Rain only here. We go down, no rain, only clear sky!”

“You mean its going to be a clear day when we reach the plains?”

I settled back pleased. And true enough within a short distance we were driving along in bright sunshine.

On the way we saw women and girl children decked up and carrying flowers and fruits on their heads making their way to nearby temple. It was some festival day.

The traffic slowed down near the temple due to the crowds. There were so many devotees spread out on either side dressed in their colorful best. I looked at the colorful dress of the women and noticed something.

Many, I should say most all of the women from young to old, wore sheer, transparent tops, with their cleavages showing. No, this was not the city, nor were these women fashion divas. They were ordinary folk out to celebrate their festival at the local temple. I cannot imagine such a thing in our much revered country which supposedly has an ancient and superior culture. Superior? Pray, tell me in what way? Is it in the way men blame their own lack of control on what women wear/show? Yes, I agree, in that matter we definitely might be. If you’d say that I felt bitterness and anger against the people of my own country at that time you will be right. The battle we wage here on a daily basis for what women should or should not wear, and the blame heaped on them for ‘provoking’ men by their attire is a national shame.

Anyways that is something our people should “grow up” to understand, their 5,ooo year old superior culture notwithstanding. Getting back, once we edged past the crowds, we were free to roar ahead and reach the next stop, the terraced rice fields.

They were a bit of a disappointment for me as I somehow expected a more vast area of them. Perhaps this place was for the tourists? Did they have more terraced fields elsewhere? I wouldn’t know. But still, it was nice to see the fields.

By then it was time to go back to our resort, rest for some time and go out and have dinner at a local restaurant. The next day was going to be our last day in Bali. Yeah, that’s for another day.

19 thoughts on “The Bali Journal: Kintamani”